One of the hardest things to do in homeschooling is to get the children to focus on the mathematics lessons. Math can be annoying when it uses the same approach every day. There are many ways to teaching your children fundamental math ideas. But if you’re searching for something more fun and engaging for the children, consider using LEGO blocks to show creative Math concepts like divisions, square numbers, and that’s only the tip of the iceberg.

The Educational Potential Of LEGO Bricks:

LEGO blocks make an incredibly handy instrument for learning math. They’re colorful, come in an assortment of shapes, and they’re very engaging to play with. Furthermore, they can be used in many ways to fit a variety of teaching methods, making them versatile teaching tools for homeschooling.

The world-famous plastic blocks can turn a bland Math lesson into something interesting. Apart from that, they also develop the proportional and spatial sense of the children. LEGOs care popularly used for elementary level children.

Possible Ways To Use LEGO:

Number Progression: Children can grasp the basics of arithmetic quite easily if LEGO bricks are used as the teaching tool. There are varieties of ways in which you can do this. For example, if you’re teaching them number progression, you can start with placing one LEGO block on large piece of paper and writing “1” below it. You can then proceed to go to higher numbers like “6” or “9” gradually by adding the necessary number of blocks and stacking them up next to their subsequent numbers.

Counting and Measuring: Once the children are done with number progression, you can move on to counting and measuring using LEGO blocks. You can write down a range of numbers (suppose 1-20) on the LEGO blocks and add corresponding number of dots on each block using a dry marker. After that, you can ask your students to count using the LEGO blocks and stacking them up in the correct order. If they face any problem with recognizing a double digit number, ask them to turn the LEGO around and count the dots on it. Afterwards, the children can use the sequenced LEGO tower to measure different objects around the house.

Arithmetic: It is also possible to do many addition and subtraction exercises with the LEGO blocks. You can start by picking up two random blocks and ask them to recognize the number they become when placed side by side. Furthermore, by counting the number of dots drawn on each LEGO, the kids can find out the added value of the digits on the face of two LEGO blocks. For example, if you draw the digits “6”, “8”, and the corresponding number of dots on two LEGO bricks, the children can count the dots on both blocks and find the answer to the equation 6+8, which are 14.

Comparison/Conditions: You can also teach kids to compare between numbers and find out which one is greater or smaller. For this exercise, print or write down some numbers (for example, 1-30) on small square pieces of paper and keep them in a basket or pot. Also, print or draw a greater than or smaller than sign. After that, keep equal number of LEGO bricks nearby and place a flat LEGO baseboard. Now, ask your kid to pick out two random numbers from the basket and place them under the baseboard.

Ask him/her to place the greater than or smaller than sign in the middle appropriately. Now, ask your student to take equal numbers of LEGO bricks as the two different numbers and build two towers on each side. Ask him/her to verify whether the stacks of LEGO accurately match the two numbers under the baseboard and whether the placement of the sign is correct. If the numbers are 9 and 3, your student will be easily count the blocks and decide if his/her initial calculation was correct or not.

Grouping: LEGOs are also great for teaching children to calculate a large number by using groups of number that make the larger number. One method you can do this is by taking 30 LEGOs and a piece of paper. You can start by asking the students to take the LEGO pieces and make arrays of four LEGOs. Therefore, the kids will be left with 7 arrays of 4 LEGOs and 2 extra ones. Now you can ask them to describe this using mathematical terms. Therefore, the kids have to write 7 x (4) + 2 = 30 to express the total number of LEGOs in their hands.

This is a great way to introduce them to the concept of grouping. They can learn to mentally create a group of numbers to constitute a great number. You can mix this exercise up by asking them to alter the amount of LEGOs in the array that makes the number 30. There can be groups of 5, 6, or 10. On the other hand, you can also change the total number and ask them to find out how many blocks should be in each array of LEGOs if they want to express that total number (for example, 50) using 5 groups of LEGOs.

Fractions: Fractions are one of the most difficult concepts to teach to elementary school kids. You can make your job so much easier if you make a LEGO fraction exercise for your students. For these kinds of exercises, you can Logos by their stud dimensions. For example, LEGOs having 4 studs can be 2×2 LEGOs; LEGOs having 6 studs can be 2×3 LEGOs etc.

You can allow your students to take 8 2×2 LEGO bricks. Instruct them to separate different colored LEGOs in different groups. From there, your students can create a LEGO fraction chart where they can write what part of the total number of bricks each color of LEGO occupies. You can do this for LEGO blocks or LEGO studs. For example if there are 3 blue LEGO blocks, the fraction value out of total blocks would be 3/8 and the out of total studs would be 12/32. These calculations can become easy for the students because they can count the studs or blocks manually for making calculations.

These are just some of the innumerable ways you can incorporate LEGO blocks in your study routine. Holding the kids’ interest in the lessons can be effortless if you start using LEGO bricks to teach them. Make Math fun with LEGOs and never hear them groaning ever again.

Atif Qazi is the owner of SchoolingSOS and an Engineer by profession. He is a former homeschooler who has teamed up with like-minded people to spread his knowledge of this topic. You can follow his topics on Twitter @Schooling_SOS 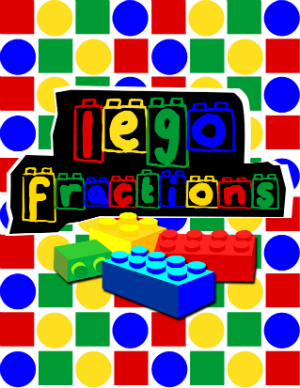 Download a few extra ideas on how to use Lego while teaching Fractions.