This game is included in a bigger bundle, you can learn more about the Focus on Fraction Bundle here: http://www.mathfilefoldergames.com/focus-on-fractions-ultimate-fraction-resource/

Roslyn ‘Roz’ Wright I do something similar, but with dice. We call it the fraction dice game and the kids love it. Each group gets a set of dice (one w/ numbers 1-6 and the other w/ numbers 7-12). One child rolls the dice and they see who comes up with the the LCM first. To work with larger denominators, I just give each child a set of dice and after they roll, they have to add their numbers first and their partner’s numbers and then find the LCM for the two sums.

Roslyn ‘Roz’ Wright And we do that too, Victoria Reiff and we just call it Dice Game. They get two dice and depending on the grade they roll the dice and perform the operation. My first grade group adds. At the beginning of the year 1st grade got two dice w/ 1-6 but now they get one of each, 1-6 and 7-12. My fourth grade group gets one of each and multiplies because they don’t know their multiplication facts. But then I found foam dice at our Dollar Tree that also had an operation one in it. So now my fourth and fifth graders can have Freebie Friday where one child rolls the operation one first so they know what they will be doing and the other child rolls the two number dice and they see who gets the answer first. I also LOVE the foam dice because you can’t hear them roll!!! grin emoticon

Robin Carlson Here’s how we played it as team competitions: Four teams of 6 members, with our extra student as the “millionaire”. Each team takes a side of the room, standing behind a row of desks (one for each of them) and each desk represents a place value. For each step, the team has to work together to determine which place value changes, so which person has to take their number from the pile of large cards with digits on which is on their desk. Example: if the tens digit has to change, the person at that desk has to put down their number and pick up their new one. When the millions place value changes, the millionaire, who is sitting in the middle of the room has to be claimed by a team by them running to the million desk, handing them the correct number from that stack, and pulling them back to their team.

Roslyn ‘Roz’ Wright And once the kids know how to get the LCM, then each student in the pair gets his/her own set of dice and this time what they roll is turned into a fraction. Roll a4 and 7 and your fraction is 4/7. Now the winner is the one who can not just find the LCM for the two fractions, but actually create the equivalent fraction and add (simplify if necessary) to get the sum.

Tara Militello I’m going to try this with my gift graders next week for one of their math centers. It’s perfect since in going to start throwing in centers that review previous content in order to prepare for the state test. To extend this, I could do the same thing with simplest form or converting between improper fractions & mixed numbers. My 6th graders could do this with fractions, decimals & percents

Jane Scudder Perfect timing! We are getting ready to start finding common denominators tomorrow! My students are always about playing a game. You could adapt the game by using fraction cards and have students compare fractions. You could vary the game by telling the students to identify the greater fraction or the least fraction first, but they have to be able to explain how they determined the answer.

Amy Smith I love this game. I have also done dice so that way you can get bigger numbers for 7th grade. Another addition is to have 3 denominators this makes it a bit more challenging. I also have done Least Common multiple. The students love any game that involves dice and cards.

Tammy Ferguson We are working on fractions right now! Although my grade level doesn’t require they know what a common denominator is, if you don’t understand the principle behind it, it makes it very difficult to do other things with fractions. I can’t wait to try this!

Tisha McCune I like the idea of doing the game between two players, and making multiple sets, which will incorporate more players. We have done something similar with two kids at the board while the others work at their desk, but the competition is just between the two at the board, this could be more fun and involve more students.

Erika Check Nice game! I love how you get the kids yelling to make it a little more exciting! I think I will use this for my math games class. The only confusing part is that you could have a mixed number – so I guess I would have to tell them the lowest number is on top. You could also have students pull two cards, and they make the proper fraction, and decide who has the higher of the 2 fractions. But if you want to just keep with the theme of lowest common denominator, then you could have them play where you have 2 circles of kids. (even number – teacher might have to join in if an odd number of kids). One circle could be within another circle. They could play with the kid that is behind them (or in front of them). Then they rotate to next person clock-wise. Just to mix it up a bit and get all kids playing with everyone!

Harriet Fontenot Bryan I shared this with my friend who teaches 5th grade. Her students loved it. They had some pre made cards with numbers on them that they used. Great activity.

Jamie Ebner Smith I like this and would adjust it for my algebra students but doing it to find a the greatest common factor. That is the part they struggle with in factoring with A greater then 1.

Amy Atherton Garcia I will be using this with my fourth graders on Monday! What an awesome way to practice when I’m pulling small group math without worksheets!

Judith Martinez This sounds like a great game. I think that for really little kids they could determine which one is smaller or larger and the one with the larger value would win the round.

Pat Burton For younger ones you could do something similar and have them use comparing numbers of which is greater or less than their partners.

Laura Locklear I teach a multi level, self contained special ed class. I would modify by giving students a multiplication chart to help them locate the multiples & LCD. 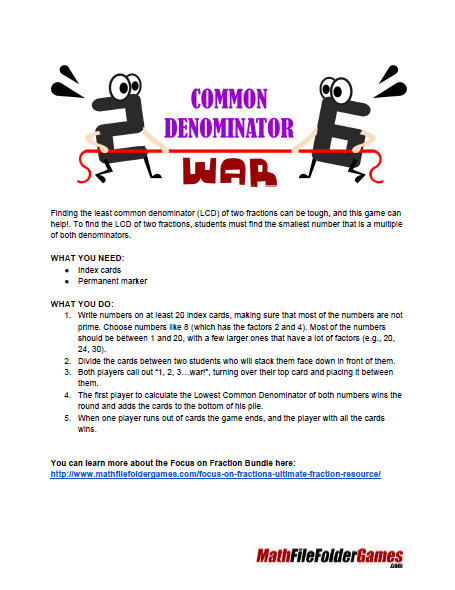 This game is included in a bigger bundle, you can learn more about the Focus on Fraction Bundle here!!!